The history of women’s voting rights in Utah is closely linked with the practice of polygamy. National suffrage activists and anti-polygamists hoped that if given the opportunity, women of the Church of Jesus Christ of Latter-day Saints would vote to outlaw polygamy. Locally, women demanded the right to vote. On February 12, 1870, the acting territorial governor signed the An Act Conferring Upon Women the Elective Franchise (Woman Suffrage Bill), recognizing women’s voting rights in local elections. Seraph Young became the first woman to cast a ballot in a Salt Lake City election on February 14, 1870. The Woman’s Exponent, first published in 1872, championed women’s involvement in local and national issues, including the expansion of voting rights in the United States. 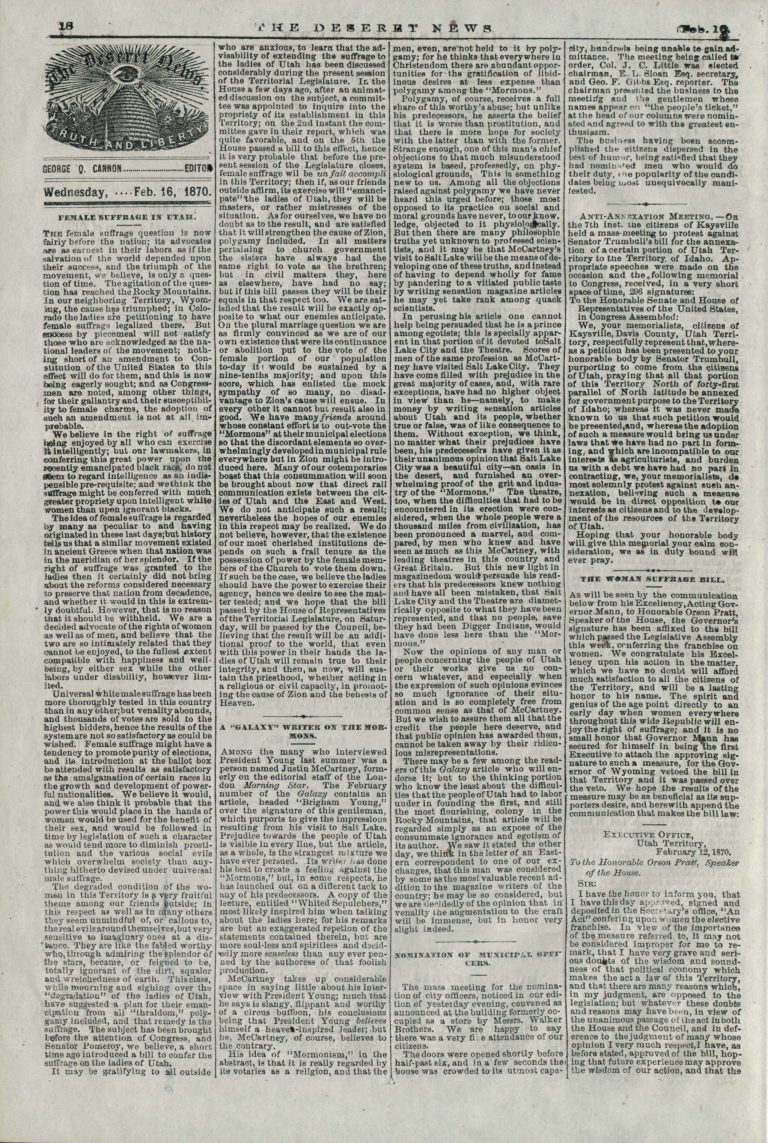 The 15th Amendment to the Constitution of the United States was ratified on February 3, 1870. This editorial, published two weeks later, exposes the racism that was directed toward formerly enslaved men as they prepared to exercise their voting rights.

Simultaneously, the Deseret News declared, “We are a decided advocate of the rights of women.” Editors commented on the connection between suffrage and polygamy, noting that critics, “while mourning and sighing over the ‘degradation’ of the ladies of Utah, have suggested a plan for their emancipation from all ‘thraldom,’ polygamy included, and that remedy is the suffrage.” However, in the editors’ view, should polygamy’s “continuance or abolition be put to the vote of the female portion of our population to-day it would be sustained by a nine-tenths majority.” 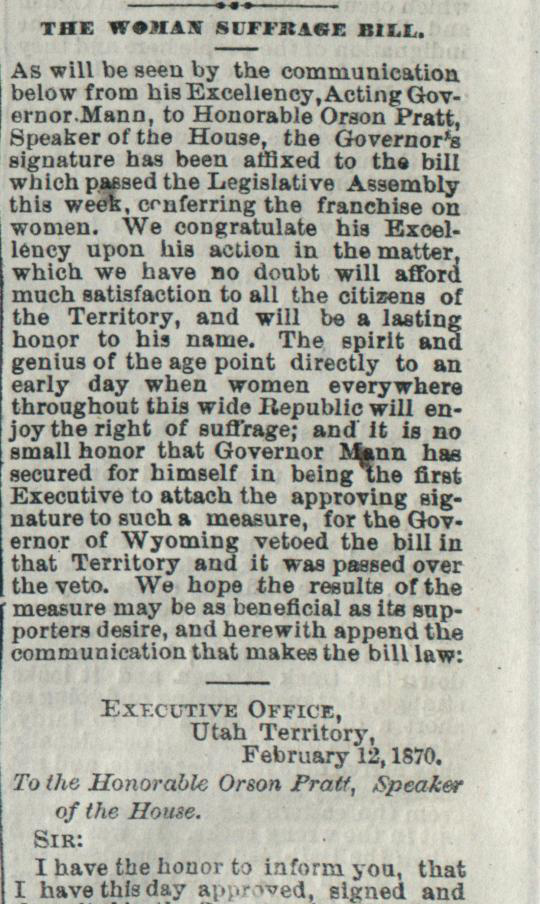 The woman suffrage bill, or “Act Conferring upon Women the Elective Franchise,” was passed unanimously by the Utah Territorial Legislature and signed by acting Governor Stephen A. Mann on February 12, 1870. Two days later, Seraph Young voted in a Salt Lake City municipal election, becoming the first woman to cast a ballot in the territory. In August 1870, thousands of women voted for the first time in Utah’s general election. Though Acting Governor Mann expressed concerns about the bill, the Deseret News noted, “The spirit and genius of the age point directly to an early day when women everywhere throughout this wide Republic will enjoy the right of suffrage.”

Two years after women’s voting rights were recognized in Utah, the first issue of the Woman’s Exponent was published. Editor Louise L. Greene, 23 years old, wrote, “A woman’s journal has come to be viewed as exclusively a medium through which woman’s rights and woman’s privileges must be discussed and strenuously advocated, in contradistinction to the rights and privileges of men. That is not our mission. We have no special need to advocate woman suffrage in Utah, for it is enjoyed by the Women of this Territory. We have no particular wrongs to contend against, inflicted upon us by our husbands, fathers, brothers, or the male portion of the community; and no special claims to champion, throwing down the gauntlet against all comers. Yet there is ample work for us to do. There is truth to be disseminated, errors to be combatted, intelligence to be communicated, the right to be vindicated, and misrepresentations to be corrected.” 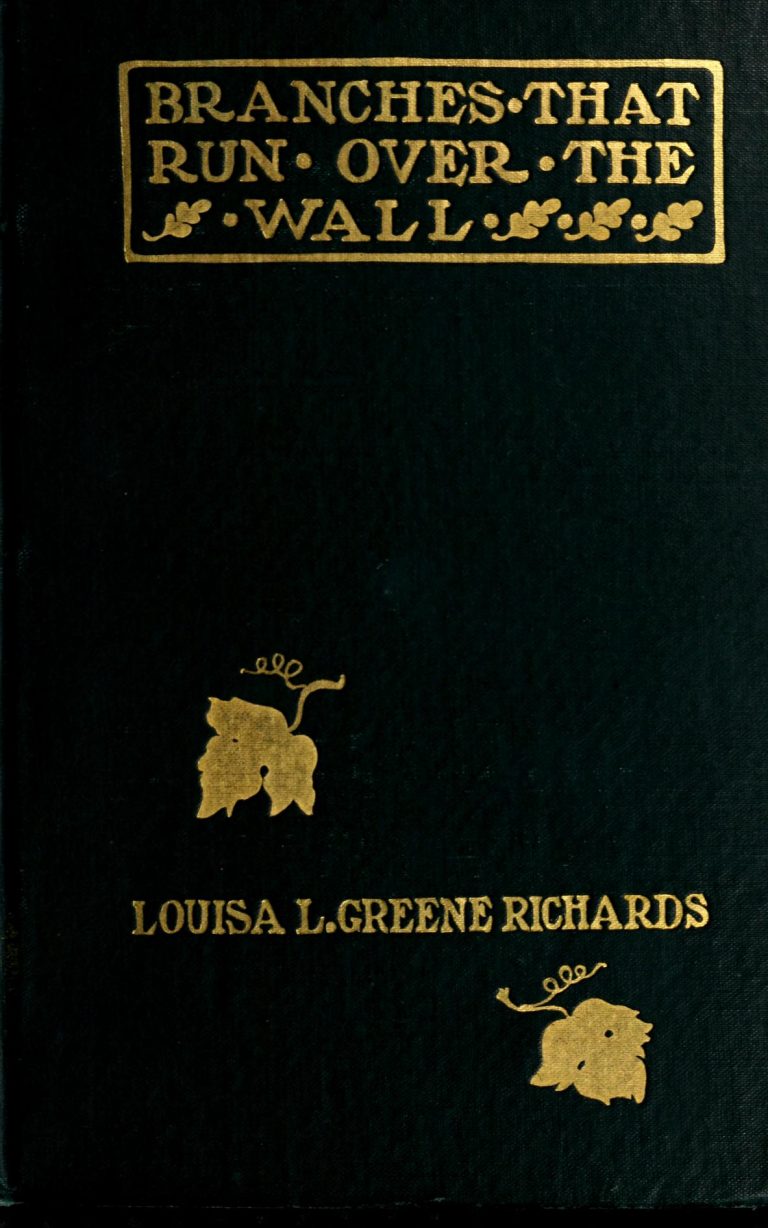 “A Thread of Thought,” Branches that Run Over the Wall by Louisa L. Greene Richards, 1904

Louisa Lula Greene Richards (also known as Louise L. Greene) edited Woman’s Exponent from 1872 to 1877. Lula married Levi Richards in 1873. After leaving the Exponent, she continued working as an editor for The Juvenile Instructor and published poems in the Woman’s Exponent, the Young Woman’s Journal, and the Relief Society Magazine. Lula and Levi had seven children, three of whom died as children. In 1904, she published a collection of poetry and prose titled, Branches that Run Over the Wall.

“A Thread of Thought” was written for the Relief Society Jubilee on March 17, 1892. This poem illustrates Lula’s perspectives on the spiritual strength of women.