In 1900, Carrie Chapman Catt became president. Soon after, Catt visited Utah and organized the Utah State Suffrage Council (or Utah Council of Women) as Utah’s official division of the NAWSA. Emily S. Richards, who worked tirelessly for the inclusion of suffrage rights in the Utah constitution and had previously founded the Utah Woman Suffrage Association, became president of this new organization. The Utah State Suffrage Council provided financial support for the goals of the NAWSA, with more than 1,000 dues-paying members.

For decades, women of the Church of Jesus Christ attended national suffrage conventions. They were active fundraisers for NAWSA and lobbied for the federal suffrage amendment. Suffrage activists in Utah also became an example to other states of the positive legislative impact of women’s voting rights.

In 1919, Congress passed the 19th Amendment, more than 50 years after a woman suffrage amendment was first introduced in the Senate. The NAWSA mobilized its members to pressure state governments to ratify the amendment. Utah ratified the amendment on September 20, 1919, becoming the 17th state of the 36 states required. On August 26, 1920, the 19th Amendment was officially adopted declaring that, “the right of citizens of the United States to vote shall not be denied or abridged . . . on account of sex.”

A notice from Mrs. Emmeline Wells stating that since suffrage was close to being obtained in Utah, she wished to hear the sentiment of the members in respect to the continuation of suffrage associations. Several ladies responded and all favored the existence of suffrage clubs in the future. They thought it the duty of all to work for the enfranchisement of women until universal suffrage should be obtained. 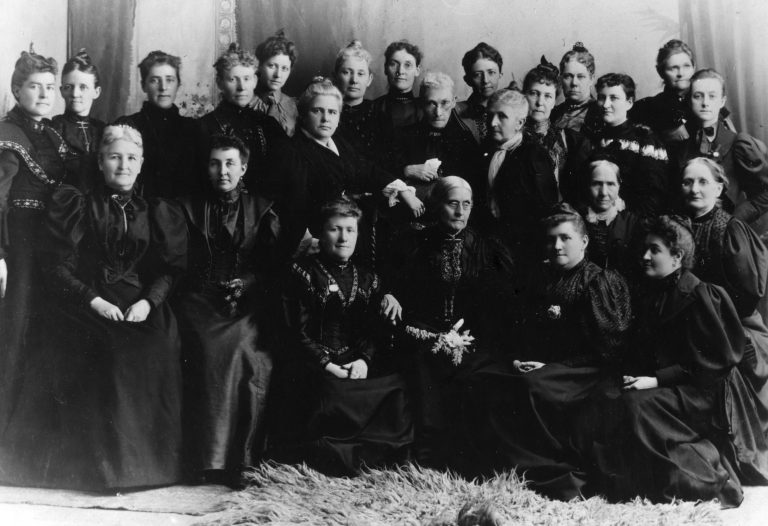 In May 1895, a convention of the National American Woman Suffrage Association was held in Salt Lake City, Utah, with Susan B. Anthony in attendance. Later that year, the Exponent published remarks given at the convention. Local suffragist and speaker Isabella Horne was introduced as one of the pioneers of 1847. Anthony replied, “Mrs. Horne came here in  ‘47. Just think of it–two years before gold was discovered in California . . . one year before the Woman’s Suffrage Convention was held at Seneca Falls this woman crossed the plains, think of it.”

Isabella Horne’s convention remarks illustrated the continued support Utah women offered national suffrage efforts, “I am heart and soul imbued with the cause. . . . I would be glad if we could induce all the men and women to believe in equal suffrage for both sexes. God created us equal . . . and the time is coming when woman will stand side by side with man, that they may work together.”

This photograph from the Utah State Historical Society shows Susan B. Anthony (front row, 4th from left) and Carrie Chapman Catt (middle row, 5th from left) on their visit to Salt Lake City.

In 1915, several women rode in a Salt Lake City parade of automobiles – decorated with flags in the suffrage movement’s colors of purple, white, and gold – to Hotel Utah, to meet U.S. Senator Reed Smoot and to encourage him to support national suffrage. Courtesy of the National Woman’s Party.