Countless women — including those listed below — fought for voting rights in the 19th and early 20th centuries. Follow these links for further reading, including texts by them and about them from their time. 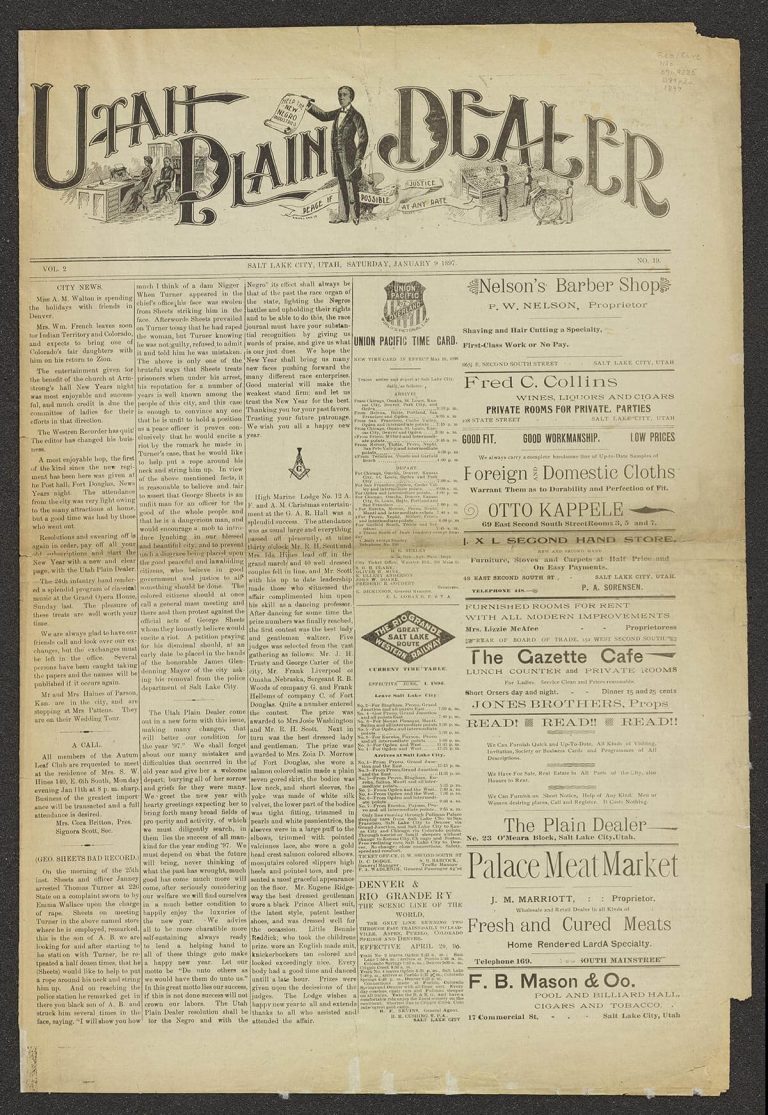 Elizabeth Taylor was born in Kansas in 1874, though not much is known about her early life. When she was 17, she lived in Utah Territory. There she married William Wesley Taylor. Along with starting a family, they also started the Utah Plain Dealer, a newspaper for the Black community of the territory. She worked as a compositor for the paper.

Taylor and her husband were members of the Utah Press Association (UPA) and the Western Negro Press Association (WNPA). Taylor also helped organize the Western Federation of Colored Women. Because of the Taylors’ involvement, the couple traveled widely in the Western United States. Sadly, there is little surviving record of their travel and activism. They also helped establish two Black churches in Salt Lake City, Trinity African Methodist Episcopal (AME) and Calvary Baptist, though Taylor’s family was more associated with Trinity AME.

Taylor cared for her children, mother, and sister-in-law during her newspaper career. When her husband became ill and died in 1907, Taylor took over his duties as editor and publisher along with taking care of her family. Later, she remarried AME Rev. John W. H. Morris. They worked together calling on the Salt Lake City Council to assure equal rights in businesses to all American citizens, regardless of color.

A copy of the Utah Plain Dealer, the newspaper Taylor and her husband edited. (online resource)

Article from the Salt Lake Herald-Republican in 1904 about the organization of the Western Federation of Colored Women (WFCW). Elizabeth Taylor called for the organization and was its president. (online resource)

Salt Lake Tribune article about the WFCW and Taylor’s call to women from many different states to join. (online resource) 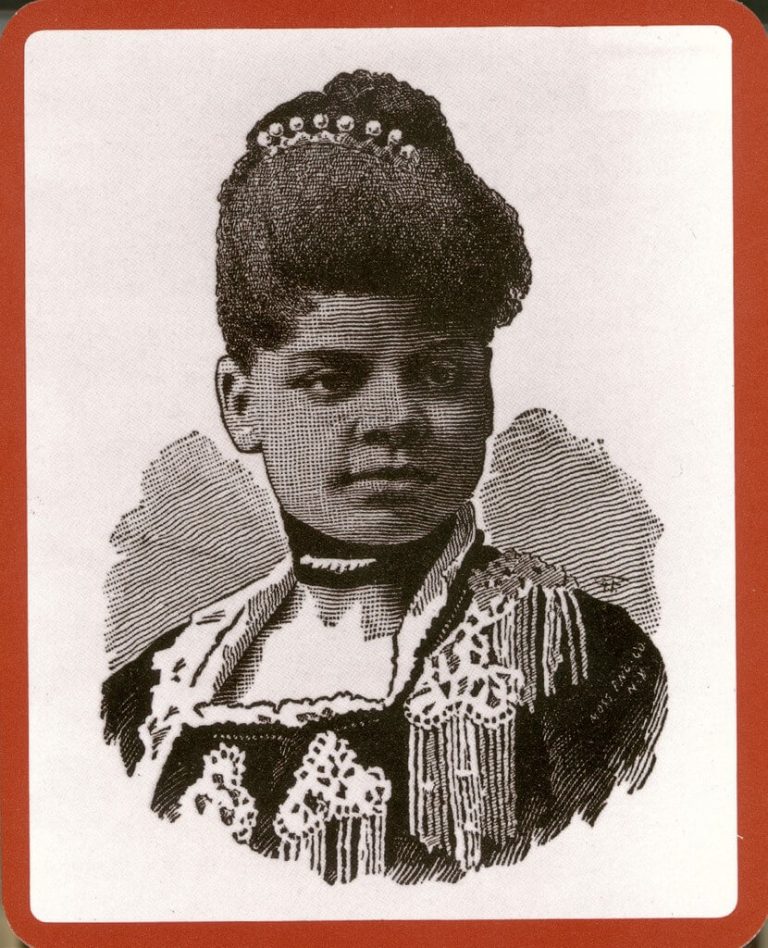 Ida Bell Wells was born into slavery in Mississippi in 1862 during the Civil War. Her parents were politically active in Reconstruction Era politics and taught her the importance of education. Later, Wells enrolled at Rust College but was expelled when she had an argument with the university president. In 1878, she found out that a yellow fever epidemic had hit her hometown, taking the lives of her parents and her infant brother. She took a job as a teacher so that she could raise the family and keep her brothers and sister together. In time, Wells moved her siblings to Memphis, Tennessee.

In 1884, Wells filed a lawsuit against a train car company when she was thrown off a first-class train, despite having a ticket. She won the case on the local level, but it was overturned in federal court. After the lynching of one of her friends, Wells turned her attention to white mob violence, taking a stance that infuriated locals. They burned her press and drove her from Memphis, forcing her to move to Chicago, Illinois. Later, Wells married Ferdinand Barnett, and they had four children. Throughout her career, Wells balanced motherhood with activism.

Wells traveled internationally, shedding light on lynching to foreign audiences and confronting white women in the suffrage movement who ignored lynching. Because of her stance, she was often ostracized by women’s suffrage organizations. Undeterred, however, she stayed active in the women’s rights movement. She was a founder of the National Association of Colored Women’s Club. She was present for the founding of the National Association for the Advancement of Colored People (NAACP). Later, Wells focused on urban reform in Chicago.

Article from The Christian Recorder (January 1885) about Wells’ lawsuit against The Chesapeake, Ohio and Southwestern Railway Company (online resource)

Crusade for Justice, the autobiography of Ida B. Wells (available for checkout)

The Memphis Diary of Ida B. Wells (available for checkout)

Selected Works of Ida B. Wells-Barnett (available for checkout) 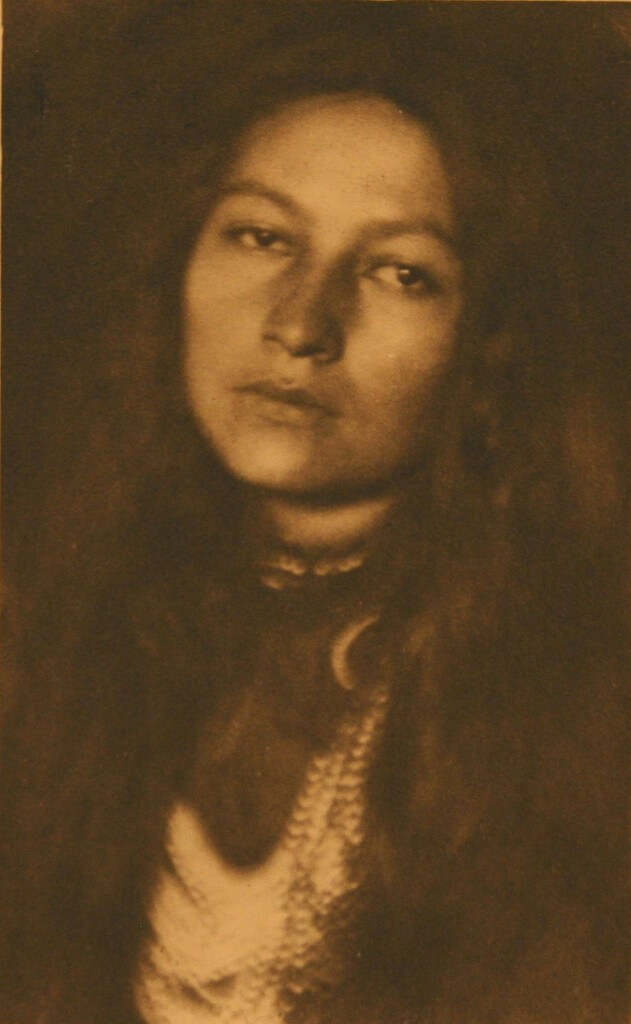 Zitkála-Šá was a Dakota woman who spent much of her adult life in Utah. She grew up both on South Dakota’s Yankton Indian Reservation and in the White’s Indiana Manual Labor Institute, a boarding school for Indian children. At the boarding school, she struggled with the school’s aims to erase her Native heritage but found joy in learning to read, write, and play the piano and violin. At the school, she became a music teacher, got her diploma, and gave her first speech on women’s inequality. Later, she went to Earlham College and began her pursuit of recording Native American oral histories and translating then into English.

She married Captain Raymond Bonnin, a Yankton Sioux, and they soon moved to Utah. Zitkála-Šá composed The Sun Dance Opera with William F. Hanson, a composer and professor at Brigham Young University. The opera was largely based on Sioux ritual and melodies and received critical acclaim. While in Utah, she joined the Society of American Indians, working for the preservation of the Native way of life and lobbying for their right to full American citizenship.

In 1916, Zitkála-Šá, her husband, and their young son moved to Washington D.C. In the capital, Zitkála-Šá promoted a movement to unite all of America’s tribes in lobbying for citizenship rights; this led to the 1924 Indian Citizenship Act. She also joined the General Federation of Women’s Clubs and she and her husband co-founded the National Council of American Indians, for which Zitkála-Šá was the council’s president, public speaker, and major fundraiser.

A Warrior’s Daughter by Zitkála-Šá. (e-book)

The Trial Path by Zitkála-Šá. (e-book)

An Indian Teacher Among Indians by Zitkála-Šá. (e-book)

The Soft-hearted Sioux by Zitkála-Šá. (e-book)

Why Am I a Pagan by Zitkála-Šá. (e-book) 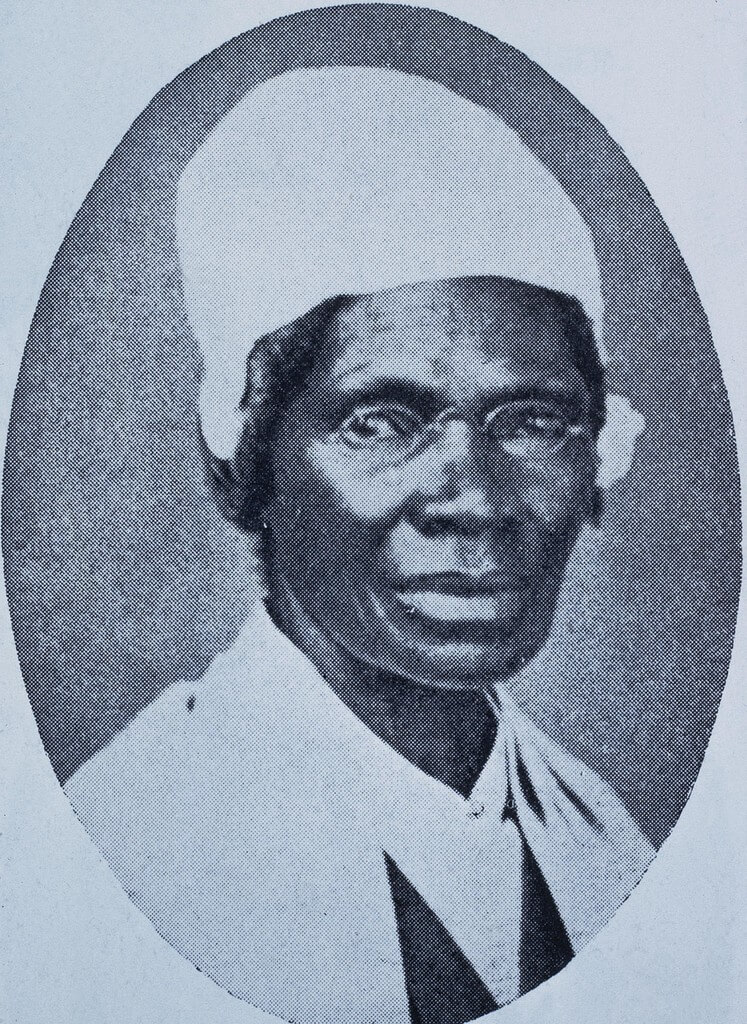 Sojourner Truth was born enslaved as Isabella Baumfree in 1797. During her early life, she endured harsh physical labor and violent punishments. In 1826, Truth escaped with one of her children, baby Sophia. Later, an abolitionist family helped her sue for the return of her son Peter who had been illegally sold into slavery in Alabama.

Truth moved to New York City, working for a local minister and becoming a charismatic speaker. In 1843, she said that the Spirit called on her to preach the truth and renamed herself Sojourner Truth. As a preacher, she met with abolitionists, gave speeches about the evils of slavery, and dictated her autobiography. Truth also met women’s rights activists and temperance advocates, causes she quickly supported.

Truth went on a lecture tour, delivering speeches that challenged prevailing notions of racial and gender inferiority and inequality. She ultimately split from Frederick Douglass’ views, who believed that suffrage for formerly enslaved men should come before women’s suffrage. Truth believed that both should occur at the same time.

When the Civil War began, Truth encouraged young men to join the Union cause and organized supplies for Black troops. After the war, she became involved in the Freedman’s Bureau, which helped formerly enslaved men and women find jobs and build new lives. She lobbied against segregation and collected thousands of signatures for a petition to provide former slaves with land. 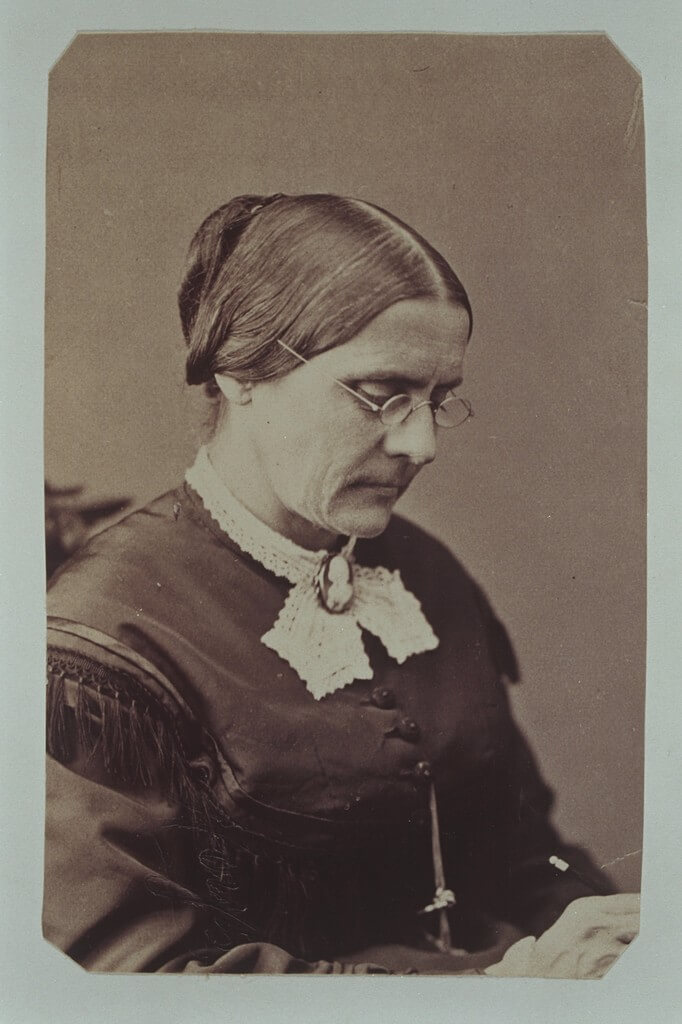 Susan B. Anthony was born on February 15, 1820. Her father was raised as a Quaker, and she was inspired by the Quaker belief that everyone was equal under God. After years of teaching, Anthony met friends of her father, William Lloyd Garrison and Frederick Douglass. Talking with them made her want to help end slavery; she became an abolitionist activist.

In 1851, Anthony met Elizabeth Cady Stanton and they became good friends, working together for women’s rights, giving speeches, and risking arrest for sharing their ideas in public. They co-founded the American Equal Rights Association and became editors of its newspaper The Revolution. Anthony became famous throughout the country through her lectures.

Anthony and Stanton opposed the 15th Amendment, which gave voting rights to African American men, because it did not include voting rights for women. They founded the National Woman Suffrage Association which pushed for a constitutional amendment to give women the right to vote. Anthony was arrested for voting in 1872, then was tried and fined for it. This action brought national attention to the suffrage movement. She also helped merge the two largest suffrage associations and led that group until 1900.

“Lecture on the Rights and Wrongs of Woman,” by Susan B. Anthony (electronic resource)

The Selected Papers of Elizabeth Cady Stanton and Susan B. Anthony (e-book)

The Selected Papers of Elizabeth Cady Stanton and Susan B. Anthony (print book) 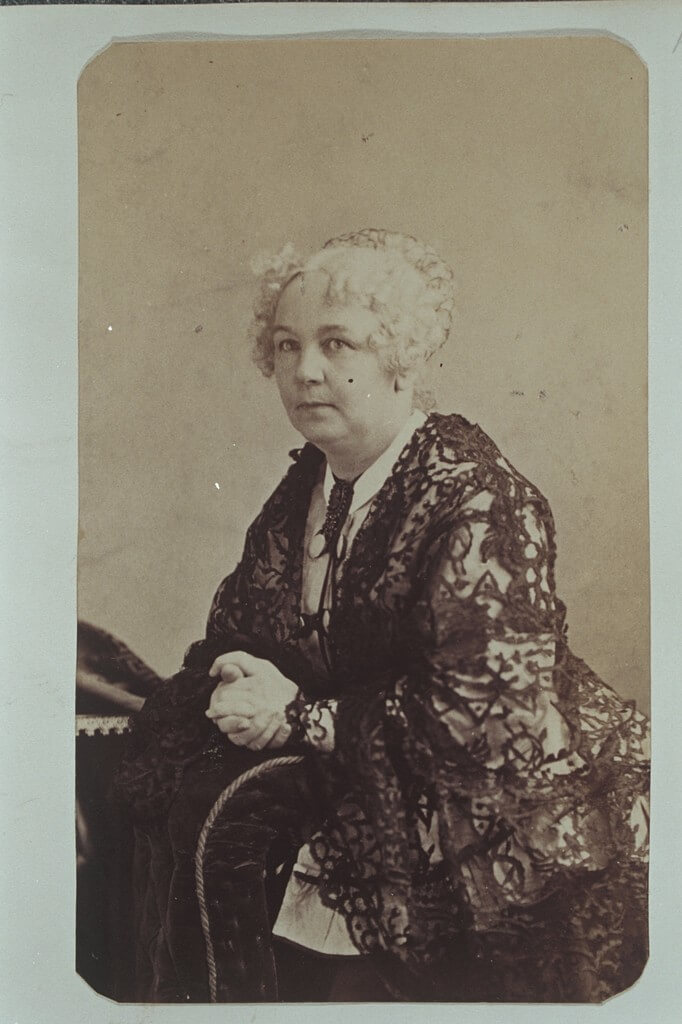 Elizabeth Cady Stanton was born in Johnstown, New York in 1815. Her parents were prominent citizens, and Stanton received an informal education from talking to her father, a lawyer, and listening to his conversations with colleagues and guests. Her formal education was from the Johnstown Academy and Emma Willard’s Troy Female Seminary.

Stanton married abolitionist lecturer Henry Stanton and became active in the abolitionist movement. She became more involved in woman’s rights while attending a World’s Anti-Slavery Convention where the women were excluded from the proceedings. She and Lucretia Mott vowed to organize a woman’s rights convention. Together they held the first Woman’s Rights Convention at Seneca Falls. Stanton wrote “The Declaration of Sentiments,” a document that expanded the Declaration of Independence to include the words woman and women throughout and listed 18 grievances relating to things such as property, custody, and wages.

In 1851, Stanton met Susan B. Anthony. They worked together on speeches, articles, and books. They were involved in the Civil War, advocated for the 13th Amendment, but opposed the 14th and 15th amendments because they believed the amendments should give voting rights to women along with African American men. They founded the National Woman Suffrage Association and edited its journal. After 1880, Stanton turned her attention to writing more than traveling and lecturing. She authored several texts including three volumes of the History of Woman Suffrage, the Woman’s Bible, and her autobiography Eighty Years and More.

Elizabeth Cady Stanton As Revealed in Her Letters, Diary and Reminiscences (e-book)